Would it be a terrible exaggeration to suggest that Facebook is the most successful single venture in history? It’s not just that Facebook made Mark Zuckerberg a billionaire virtually overnight, or that its 2012 IPO was one of the biggest in history. The success of Facebook is as much social and cultural as it is financial. Certainly, it has transformed the ways in which businesses reach their customers and analyze the markets in which they operate, but it has done so by making much more fundamental changes to the ways in which people communicate, network, and connect with one another.

On Wednesday, Zuckerberg made a post highlighting this success. The message coincided with the release of the company’s quarterly financial results, but it emphasized the much more general impact of Facebook, in terms of the growth of its user base and some of the ways in which it had been used during the year 2015. 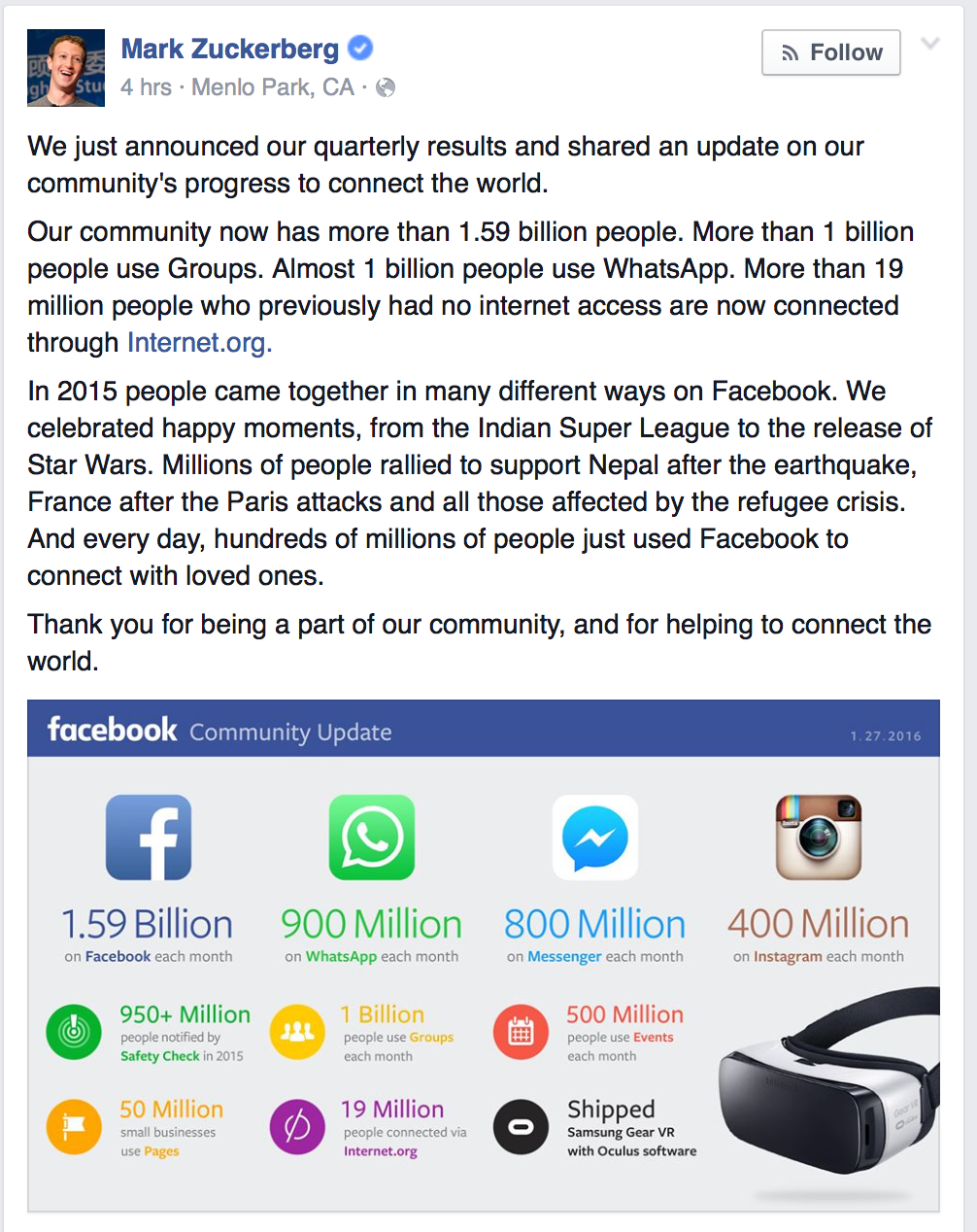 Zuckerberg pointedly described Facebook as a single community, which he noted had grown to 1.59 billion people. That’s more than 20 percent of the current global population. And according to Zuckerberg it includes 16 million people who lacked internet access prior to the efforts of the company’s Internet.org partnership to further broaden this community.

Whereas other social media platforms have shown a tendency to either fall out of favor or plateau after a certain amount of growth, Facebook shows no sign of slowing down. As such, with every year – indeed, with every quarter – it becomes a more indispensable tool for businesses, political campaigns, and public personalities to use in reaching out to their local, national, and global target audiences.

Naturally, more people realize this plain fact every day. So at the same time that the opportunities presented by Facebook are constantly growing, so is the amount of competition that the Facebook community represents. In the midst of this landscape, a person or company who wants to leverage Facebook’s unprecedented success to further their own success must either have tremendous know-how, or else be able to lean on a social media marketing firm that understands how to stay ahead of that competition.

With a community of nearly 1.6 billion people at your fingertips, it is easy to get lost in the crowd. But if you manage to make yourself stand out, the benefits are without parallel, not just in the current world of business, but perhaps in the whole history of marketing.

Find the Perfect Shopify Design Company for Your Business

CART0
There are no products in the cart!